The season of lizards is early spring through late fall. A long season, at least around here. But for the past month or so, the wild lizards that can typically be found around our backyard have been inactive. As a result, there have been no new additions to Daniel’s collection of reptiles. That lizard-less season has come to close, however, and both he and John caught a Green Anole! 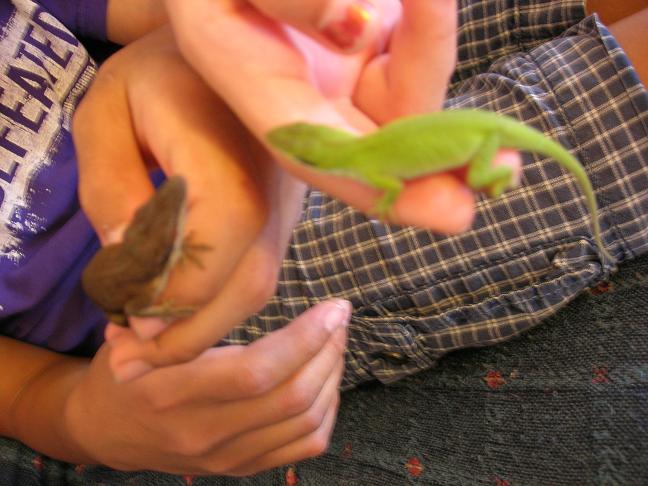 One of these Green Anoles is looking greener than the other…

Those aren’t the only new lizards, though. Toady, one of Daniel’s three Texas Spiny Lizards, (named for her extremely fat physique, giving the impression that she’s part toad) was looking much slimmer the other day. A quick investigation of her cage gave the explanation: 19 newly-laid eggs! The picture below is the bowl full of warm soil that they’ve moved the eggs into.

We had actually been expecting this for while, but we weren’t expecting 19 eggs, nor the knowledge that they’ll take 2 to 3 months to hatch.

Honestly, having lizards in the house wasn’t always pleasant for me. I didn’t always appreciate the spiky, scaly creature that leaps out of Daniel’s hand and into my hair when we’re trying to watch a movie. But seeing how much excitement and happiness they bring to Daniel and Gloria makes up for that. And you know what? I’m looking forward to having 19 baby lizards in the house.